Welcome to the Moon! 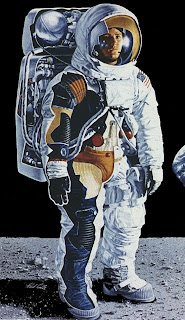 I was in Ballyclare for the first meeting of the Northern Ireland Amateur Astronomy Society last night giving a talk on the Moon. I don't know about the audience but I had a great time. Thanks to all involved for making me so welcome.

I promised to provide sources for all the wacky stuff I talked about so here's a reading list.

Apollo Archive (Images and much more about the Apollo missions)

Bizony, Piers, The man who ran the Moon: James Webb, JFK and the secret history of project Apollo, Icon, Cambridge, 2006 (Fascinating look at how the Apollo missions were managed.)

Chaikin, Andrew, A man on the moon: the voyages of the Apollo astronauts, Penguin, London, 1994 (Complete, accurate, brilliantly written: the best book on Apollo, if you read one book on this list, make it this one!)

Clarke, A.C, “The men on the Moon” in Report on Planet Three, Pan, London, 1984 (Amusing essay on the naming of lunar features)

Godwin, Robert, The lunar exploration scrapbook, a pictorial history of lunar vehicles, Apogee, Ontario, 2007 (A magnificent guide to the evolution of Apollo hardware including vehicles and devices which never flew.)

Pellegrino, Charles R. and Stoff, Joshua, Chariots for Apollo: The making of the lunar module, Antheneum, New York, 1985 (History of the Lunar Module with some facts I’ve never seen anywhere else.)

Rose, Bill, Secret Projects, military space technology, Midland Publishing, Surrey, 2008 (Not specially about the moon, but has a detailed description of a bizarre 1950’s plan to build a US Army base on the Moon)


Smith, Andrew, Moondust: in search of the men who fell to Earth, Bloomsbury, London, 2005 (Very readable account of the lives of the Apollo crews today.)
Posted by manol